From hundreds of tourist attractions this city hosts, it’s hard to choose only ten. Churches, museums, palaces, bridges… We could make a top 10 for each of these categories.

Although the mission was hard, we believe that we succeeded to gather the most important tourist attractions in Venice. And if you do not agree with us, you will definitely tell us in the comments below.

Ca’ d’Oro (the Golden House, in the Venetian dialect), known also as Palazzo Santa Sofia, is one of the most beautiful palaces in Venice. The Gothic facade of the palace, once covered in gold, is a beautiful example of the Venetian Gothic style.

Ca’ d’Oro was built in the first half of the 15th century by the architects Giovanni and Bartolomeo Bon. In 1894, the palace was bought for a fabulous sum by the Baron Giorgio Franchetti, to house his huge art collection. Today, the palace hosts the Giorgio Franchetti Gallery, which was inaugurated in 1927, in the memory of the baron, who died in 1922.

The today’s church was designed by the great architect Andrea Palladio in 1565 and completed after his death, in 1610, by one of his disciples, Vincenzo Scamozzi. The construction is, practically, a compromise between the drawing of a classical temple and a Christian church. 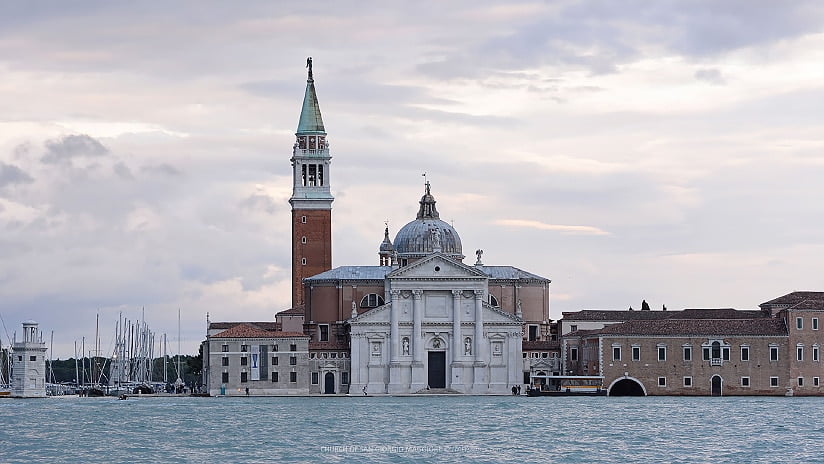 Il Redentore (Church of the Most Holy Redeemer) is a beautiful church located on the Giudecca island, on the waterfront of the Giudecca Canal, across from Zattere. The church, a wonderful example of Renaissance architecture, is another work of the architect Andrea Palladio.

Inside, we can find a series of paintings by Jacopo Bassano, Paolo Veronese and Alvise Vivarini, and sculptures by Jacopo Tatti, better known as il Sansovino. 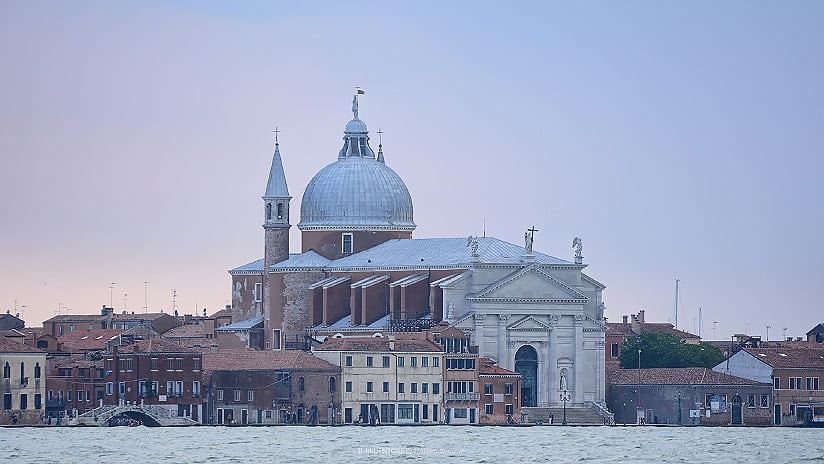 Basilica of Santa Maria Gloriosa dei Frari, commonly known as the Frari, is an imposing church located in the Campo dei Frari, in the center of the San Polo district.

The church was built of brick starting with 1338, in the Venetian Gothic style, and its facade was completed only in 1440. The church was consecrated in 1492, under the name of Santa Maria Gloriosa.

The interior is notable for a large number of monuments, of which we can mention the ones dedicated to the Doge Giovanni Pesaro, to the sculptor Antonio Canova and to the painter Tiziano Vecellio (Titian). Of the many paintings found in the church, the most important are the works of Titian, the Assumption of the Virgin on the high altar and the Pesaro Madonna. 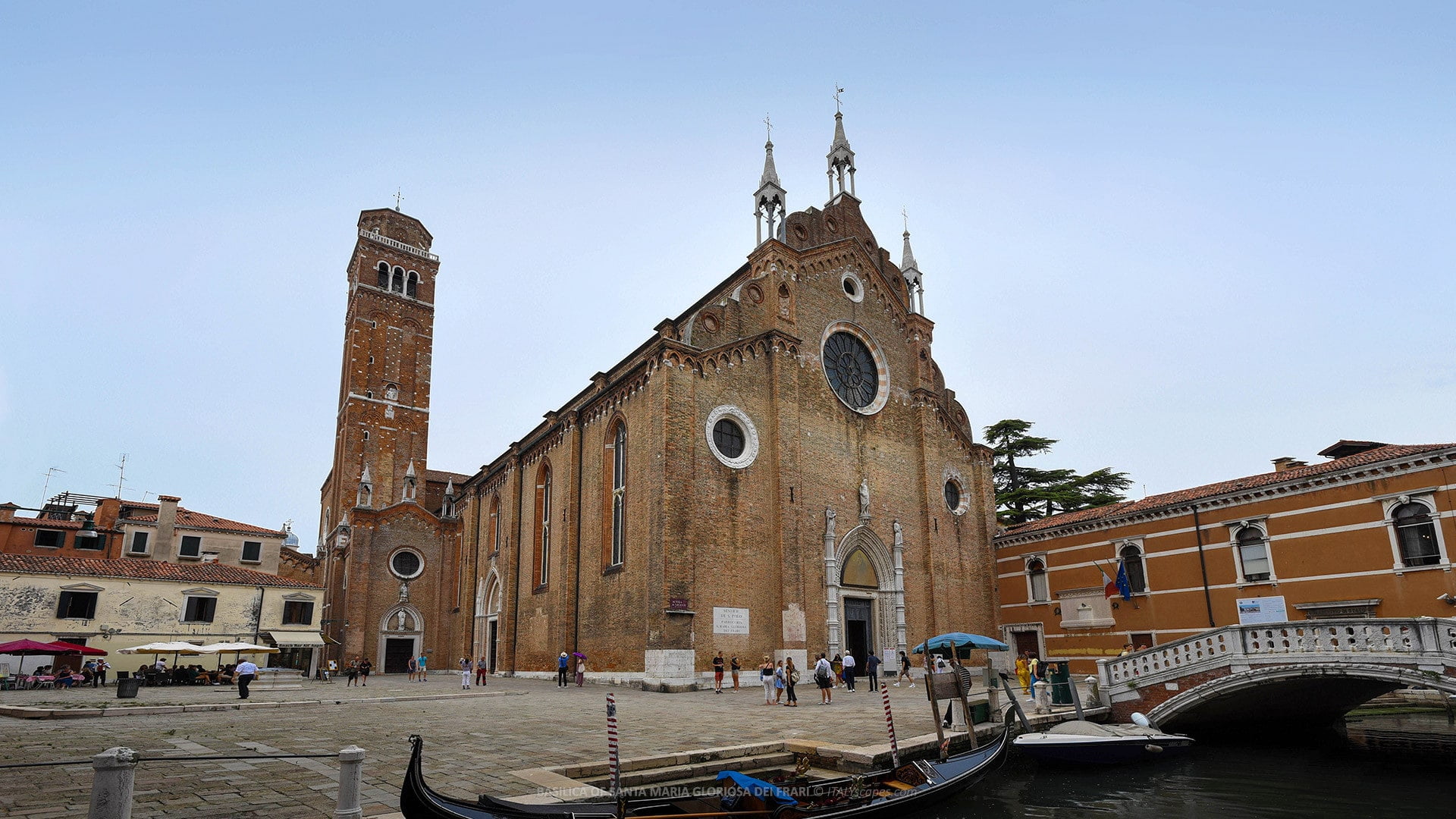 Over the centuries, the bell tower collapsed many times and was rebuilt each time, better and more solid than before. The last time it collapsed was in 1902, and was reconstructed in its present form in 1912.

With a height of 98.6 meters, the Campanile is one of the tallest bell towers in Italy. Simple in shape, it consists of a brick square shaft with a 12 meters side and about 50 meters in height, above which is placed the belfry. 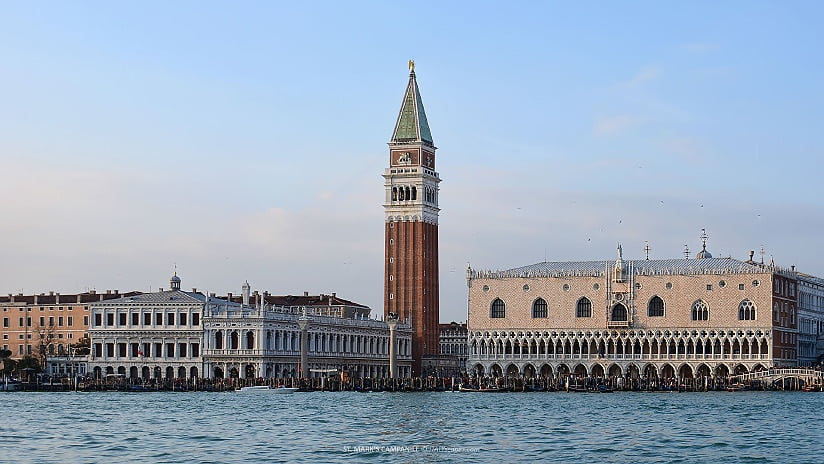 The Rialto Bridge (Ponte di Rialto) is one of the four bridges spanning the Grand Canal, and probably the most beautiful one. 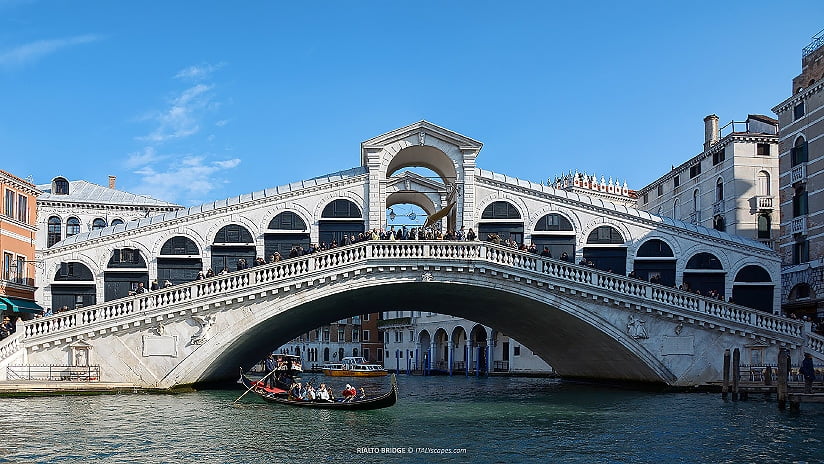 Cathedral of Saint Mark, commonly known as Saint Mark’s Basilica, is the Cathedral of Venice, located in Piazza San Marco, adjacent to the Doge’s Palace.

The initial structure of the church dates back to the 11th century, and the facade from the 13th century. In 1807, after the fall of the Republic, during Napoleonic domination of the city, the Saint Mark’s Basilica became the Cathedral of Venice.

The facade of the church is enclosed by Gothic crowning with aedicules, statues and floral decorations made between the 14th and 15th centuries, and is divided in three orders. Inside, we can find beautiful mosaics added between the 11th and the 19th centuries. 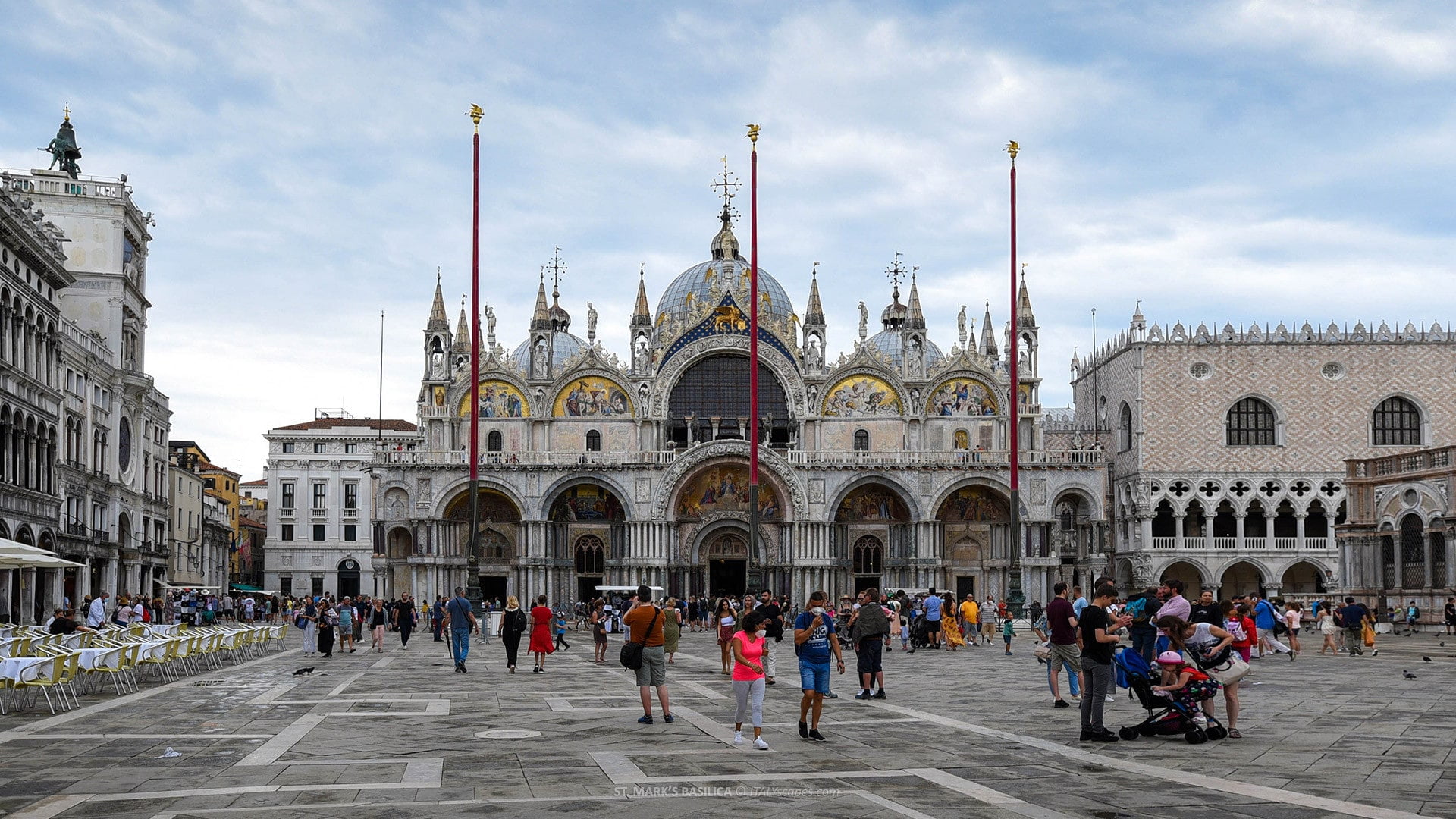 The Doge’s Palace is, without doubt, the most beautiful palazzo of Venice, and to learn about the supreme expression of the Venetian culture, whether you are interested in architecture, painting, sculpture or all together, is imperative to visit it.

The palace was built initially of wood in the 9th century, and rebuilt several times afterwards, acquiring the form we see today between 1340 and 1424. After a major fire that occurred in 1483, the inner courtyard was rebuilt in a Renaissance style by the architect Antonio Rizzo.

Inside the palace, we can find paintings by Tintoretto, Tiziano Vecellio, Paolo Veronese and Jacopo Bassano. Also, there are works of Jacopo Sansovino, who built the Giants’ Staircase, Scarpagnino, who completed the Golden Staircase, or Antonio Contino, who left behind the beautiful Bridge of Sighs. 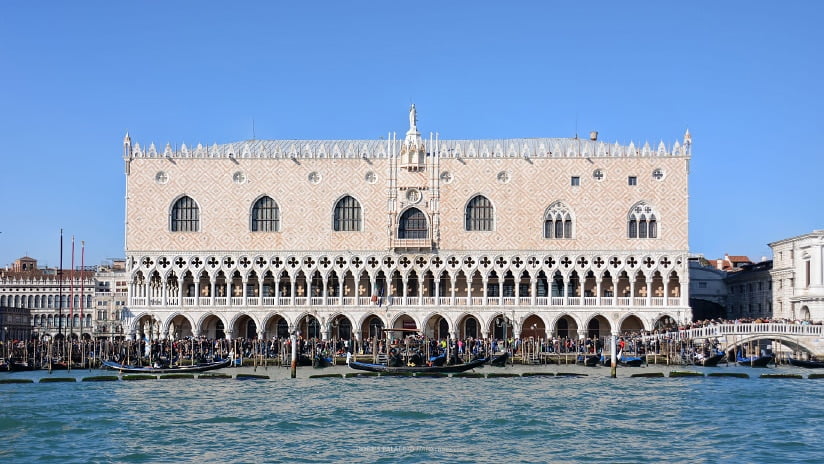 Saint Mark’s Square (Piazza San Marco) is one of the most famous squares in the world, a collection of religious, cultural, historical symbols, and a symbol in itself.

In the 9th century, the St. Mark’s Square was just a small free area in front of the St. Mark’s Basilica. It was enlarged to its present form in 1177. The square was paved for the first time in the second part of the 12th century, and the pavements were changed in 1723, after a design by the architect Andrea Tirali.

In Piazza San Marco, we can find invaluable buildings, such as the Doge’s Palace, the St. Mark’s Basilica, the Clock Tower, the Sansovino National Library, the Procuratie wings, home to the Correr Museum, and last but not least, the St. Mark’s Campanile. 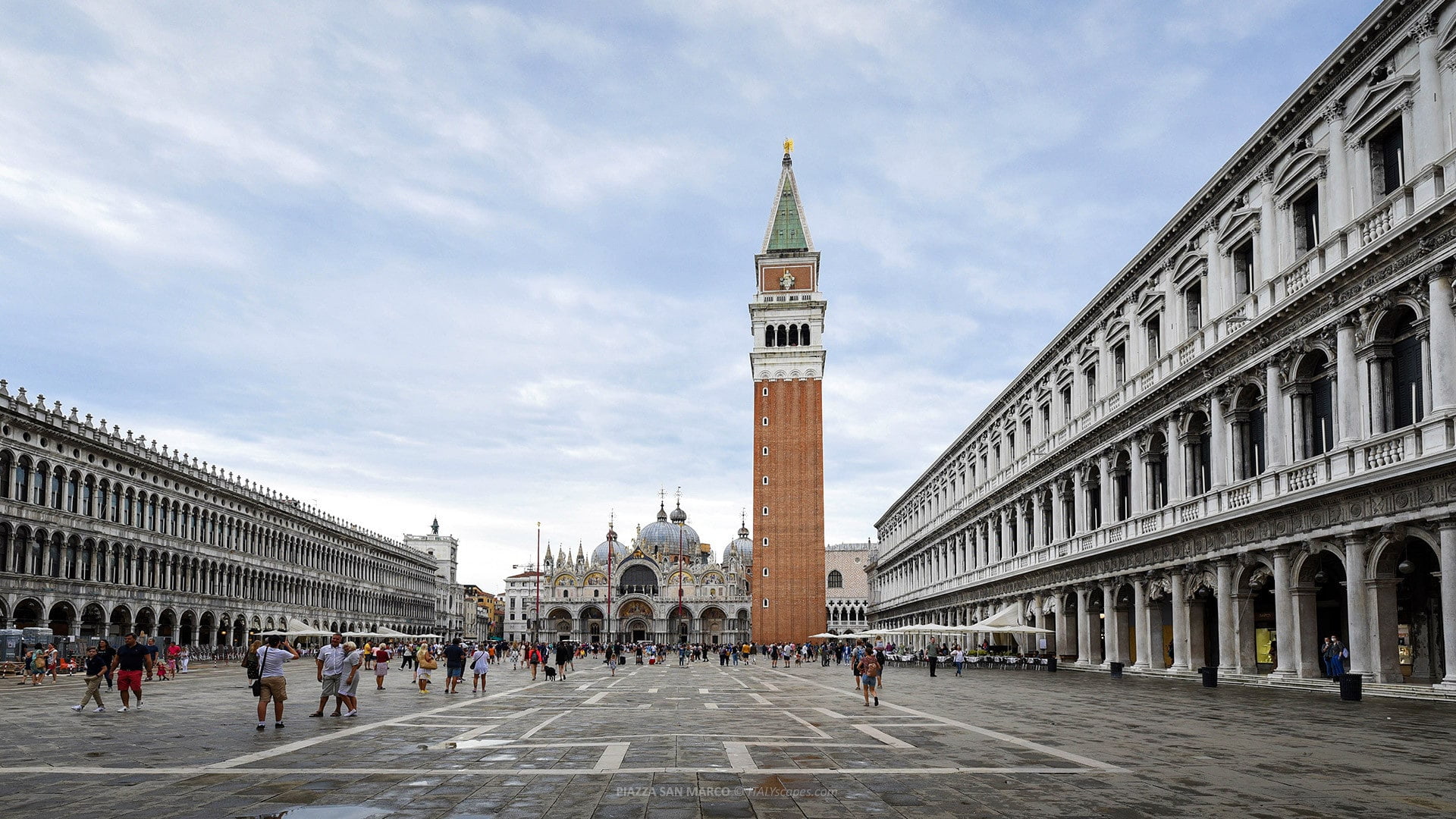 With a length of nearly 4 kilometers and a width between 30 and 90 meters, the Grand Canal is the main “boulevard” of Venice, on which boats of all kinds sail all the time, supplying the city with all sorts of goods and… tourists.

Since the 9th century, when the Venetians moved from the island of Lido to Venice, the Grand Canal began to be exploited as a navigable route. The commerce began to flourish on its banks, and merchants and politicians started to built impressive palaces overlooking the canal. 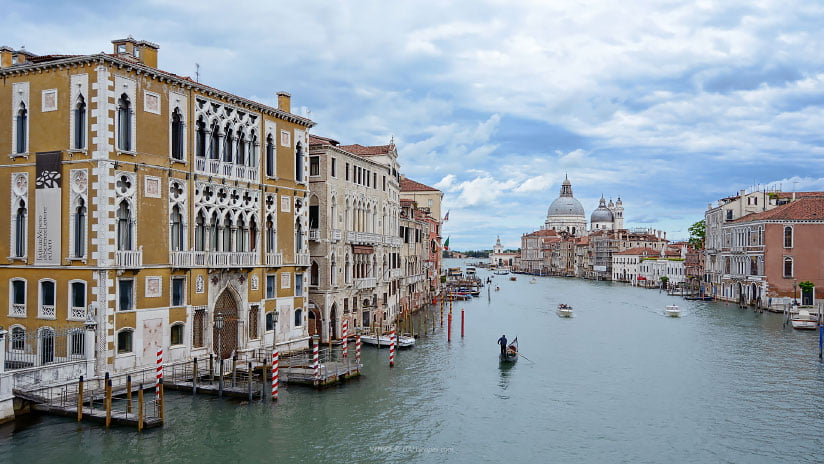 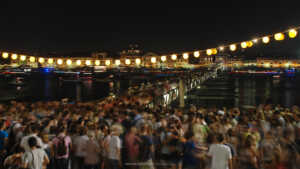