If Venice had not existed, Verona would probably have been the most beautiful city in northern Italy. But Venice exists, and Verona must settle for second place. However, when we talk about Italy, the second place is also a superlative.

Verona is built along the banks of the Adige river, at the point where it flows into the Po Valley, about 30 kilometers east of Lake Garda. The city is located at the foot of the Lessini mountains, represented by the San Pietro Hill.

In 2000, Verona became a UNESCO World Heritage Site due to the value and importance of its many historical landmarks. Below, there are the most important 10 attractions of Verona. If you have a different opinion than us, be sure to tell us in a comment. 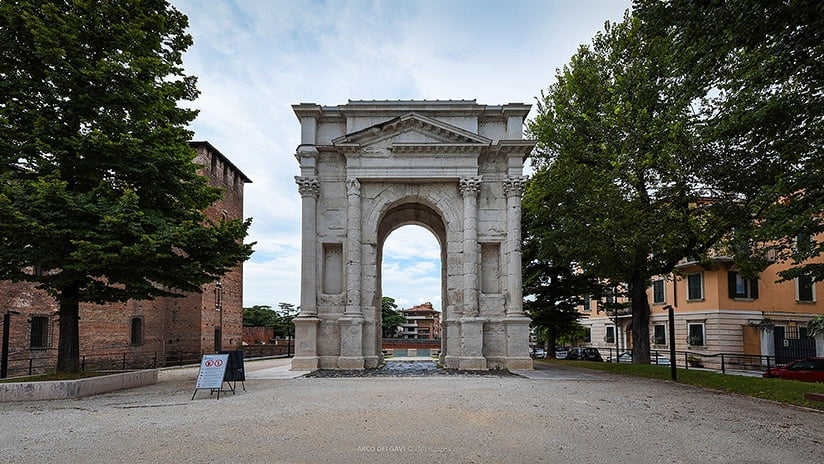 Arco dei Gavi is an ancient monument in Verona, located just outside the walls of the ancient Roman city. The arch was commissioned by the Gavia family to the architect Lucius Vitruvius Cerdo, and built around the middle of the 1st century.

In the 12th century, the arch was stripped of the decorative elements and incorporated into the new municipal walls, being used as a city gate. In 1805, during the Napoleonic occupation, the French architects dismantled the monument for reasons of military security. In 1931, the arch was rebuilt near the fortress of Castelvecchio by the historian Antonio Avena, the archaeologist Carlo Anti and the architect Ettore Fagiuoli. The monument was inaugurated on October 28, 1932.

Arco dei Gavi has a height of 12.69 meters, a length of 10.96 meters on the longer side and 6.02 meters on the shorter one. The main facades of the arch are divided into three zones by four Corinthian columns. The two central columns of each facade are connected by an entablature and a pediment above, and frame on both sides the main arch, which is characterized by a three-band archivolt resting on two Corinthian pillars.

The Church of San Fermo Maggiore is dedicated to Saint Fermus, a Christian martyr under Emperor Maximian. According to tradition, Saints Fermus and Rusticus were martyred in Verona in the year 304 AD, and the locals built a church in their honor in the 5th or 6th century.

Between 1065 and 1143, the Benedictines restructured the complex and built two churches in Romanesque style: the lower one to preserve the relics, and the upper one for the daily celebrations. In 1261, the Franciscans took the place of the Benedictines and rebuilt the upper church. The work was completed around 1350. Between 1905 and 1909, considerable restoration works were carried out.

The facade of the church, completed around 1350, is a fusion of Romanesque and Gothic style. The facade presents two loggias and a four-light window in the middle, surmounted by a smaller one with three lights and two round ones on the sides, as well as an imposing portal, built in the 14th century.

The square was formed in the Middle Ages, and was gradually defined by the palaces that were built around it. In the southern corner of the square, we can find Palazzo della Ragione, which was built at the end of the 12th century and was partly modified in the 19th century. In ancient times, the palace had four towers, of which only one remains today, the imposing Torre dei Lamberti.

Near the Palazzo della Ragione, on the eastern side of the square, there is Palazzo di Cansignorio, also known as Palazzo del Capitanio, the seat of the Scaligeri and, later, of the Venetian administration. To the northwest, we can find the Palazzo del Podesta, built also by the Della Scala family. Loggia del Consiglio, traditionally called Loggia of Fra’ Giocondo, located in the northern part of the square, was commissioned by the Municipality of Verona for the meetings of the Patrician Council, and built beginning with 1476.

Basilica of Santa Anastasia is a Catholic church in Verona, located in Piazza Santa Anastasia. Although the church is named after the Dominican Saint Peter Martyr, it is better known as Santa Anastasia due to an ancient Arian cult building which stood on this place, dedicated to Anastasia of Sirmium.

The Dominican friars arrived in Verona in 1220, and in 1290 they began building the church. Although the basilica was solemnly consecrated on October 22, 1471, by the cardinal and bishop of Verona Giovanni Michiel, the works continued for over two centuries. On March 19, 1807, at the behest of Napoleon Bonaparte, the Dominican order was suppressed. Subsequently, the church was entrusted to the diocesan clergy and it became a parish.

The exterior of the Basilica of Santa Anastasia represents a fine example of Veronese Gothic architecture. The facade, unfinished, is characterized by the large portal framed by a marble arch, a central rose window, two mullioned windows corresponding to the aisles and buttresses that rise above the eaves line on the sides.

Torre dei Lamberti is a medieval tower in Verona, 84 meters high, located in Piazza delle Erbe, in the historical center of the city. The tower was built by the powerful Lamberti family starting with the 11th century.

In May 1403, the lightning struck the top of the tower, and the restoration work began only in 1448, and lasted until 1464. About the same time, the tower was elevated to 84 meters. In 1798, the count Giovanni Sagramoso placed, at his own expense, a clock on the tower.

The tower is now open to the public and it is possible to climb up to the top, thus enjoying the panoramic view of the city.

Piazza Bra is the main square of Verona. The area began to take the shape of a square only in the first half of the 16th century, when the architect Michele Sanmicheli completed the Honorij Palace, which delimited the western side of the future square.

In 1770, Alvise Mocenigo inaugurated the first part of the Liston, the paved sidewalk that flanks Piazza Bra. On March 13, 1782, Francesco Menegatti presented a project for the definitive paving of the Liston and, after his intervention, Piazza Bra became the favorite place for afternoon walks.

In the 19th century, Palazzo della Gran Guardia delimited the southern side of the square, and around the same time the architect Giuseppe Barbieri build Palazzo Barbieri in the eastern part of the square. In 1873, the central garden of the square was created, with a fountain in the center. 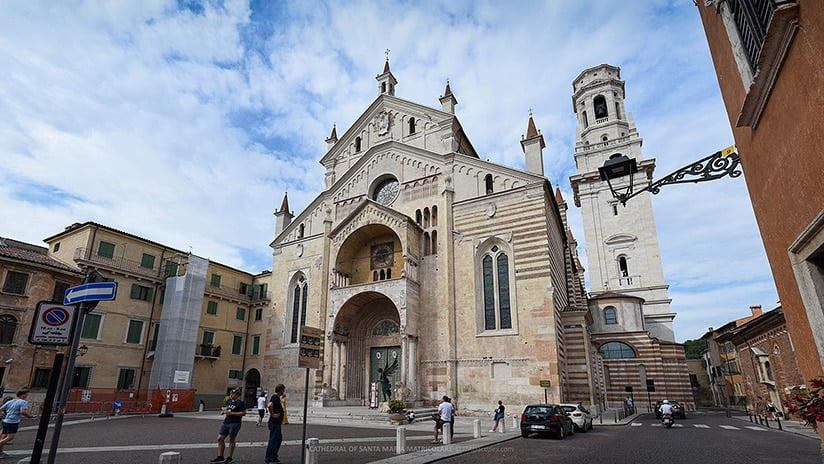 The Cathedral of Santa Maria Matricolare, also known as the Duomo di Verona, is the cathedral of Verona. The first Christian church in Verona was built in the 4th century on the site of the current cathedral. In the 5th century, the primitive church was flanked by a second, larger. Both of these structures were razed to the ground by the earthquake of 1117.

The construction of a new cathedral was begun in 1120, and was completed in the year 1187. Over the centuries, especially in the 15th and 16th centuries, the church undergone several alterations.

The facade of the cathedral is divided into three parts. In the center, there is a porch with the lower part in white and pink marble, and the upper part in tuff. On the facade, there are two large double-arched windows and a central rose window surrounded by a blind loggia. The side chapels of the church are enriched by numerous sculptures and paintings, the most famous being the painting of the Assumption of the Virgin by Tiziano Vecellio.

Castelvecchio (Old Castle) is a medieval castle located in the historical center of Verona. The castle is the most important military construction of the Scaliger dynasty, the family that ruled the city in the Middle Ages.

The construction of the castle was commissioned by Cangrande II della Scala in 1354, and the works were completed in 1376 by Antonio and Bartolomeo II della Scala. At the same time, Ponte di Castelvecchio, the fortified bridge over the Adige, was built.

The aerial bombardments of 1945 severely damaged the eastern wing of the castle, while the retreating German troops destroyed the Castelvecchio Bridge. The reconstruction of the wing was completed in 1947, under the direction of the architect Alberto Avesani, while the bridge was reconstructed by Piero Gazzola between 1948 and 1951.

The layout of the castle is the result of several construction phases, and of the transformations and restorations that have taken place over the centuries.

Basilica of San Zeno Maggiore is a magnificent church in Verona, dedicated to Saint Zeno, an early Christian Bishop of the city. One of the Romanesque masterpieces in Italy, the church develops on three levels, and the current structure dates back to the 11th century.

The facade of the church, built of tuff, is divided into three vertical parts. The central one is surmounted by a triangular pediment in white marble, which creates a contrast with the rest of the facade. The two lateral parts have sloping rooflines, with small blind arcades under.

The rose window, known also as the Wheel of Fortune, the work of Brioloto de Balneo, is decorated with six statues depicting the alternating phases of human life. The portal of the church is decorated with 24 square bronze tiles for each door leaf.

The interior of the church has three levels: the crypt, the central part, also called the plebeian church, and the presbytery, which contains the high altar.

Arena di Verona is an impressive Roman amphitheater located in the historical center of Verona, in Piazza Bra. The Arena, built around the year 30 AD, is one of the best preserved amphitheaters in the world, thanks to the systematic restorations carried out since the 16th century.

During the 16th century, the amphitheater became more and more important for the city, and Verona decided to restore the ancient monument. The restoration began in 1568 and the works were completed in 1586.

The interior of the amphitheater consists of two main parts: in the center, the arena, where the shows were held, and the cavea, with tiers for the public. The arena measures 75.68 meters in lenght and 44.43 meters in width. The cavea is 39.40 meters wide.

Top 10 Most Popular Italian Festivals in 2022

Besides places of incredible beauty, Italy also means traditions of centuries preserved to this day. From north to south and from …
Read More 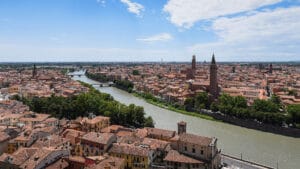 If Venice had not existed, Verona would probably have been the most beautiful city in northern Italy. But Venice exists, and …
Read More

After last year’s Carnival ended prematurely on February 23, due to the outbreak of the Coronavirus pandemic, it seems that the …
Read More
Near me
1000 km