First of all, before discussing about the most important medieval festivals in Italy, let’s find out what is a historical reenactment event. Well, according to Wikipedia, the expression describes an activity in which amateur hobbyists and history enthusiasts dress in historical costumes and try to recreate a historical event, usually a battle fought in the Middle Ages.

In short, a medieval festival usually includes a historical reenactment event dedicated to the patron saint of the city in which is held. And many of these medieval festivals in Italy are linked to a Palio.

But what is a Palio? According to the same Wikipedia, a Palio is an annual contest, often of a historical character, between the neighborhoods of a town. Typically, the Palio commemorates some event or tradition of the Middle Ages and often involve horse racing, archery, jousting, crossbow shooting, and similar medieval sports.

Now that we clarified what is a historical reenactment event and what is a Palio, let’s begin. Find below the most interesting 10 medieval festivals in Italy in 2023! 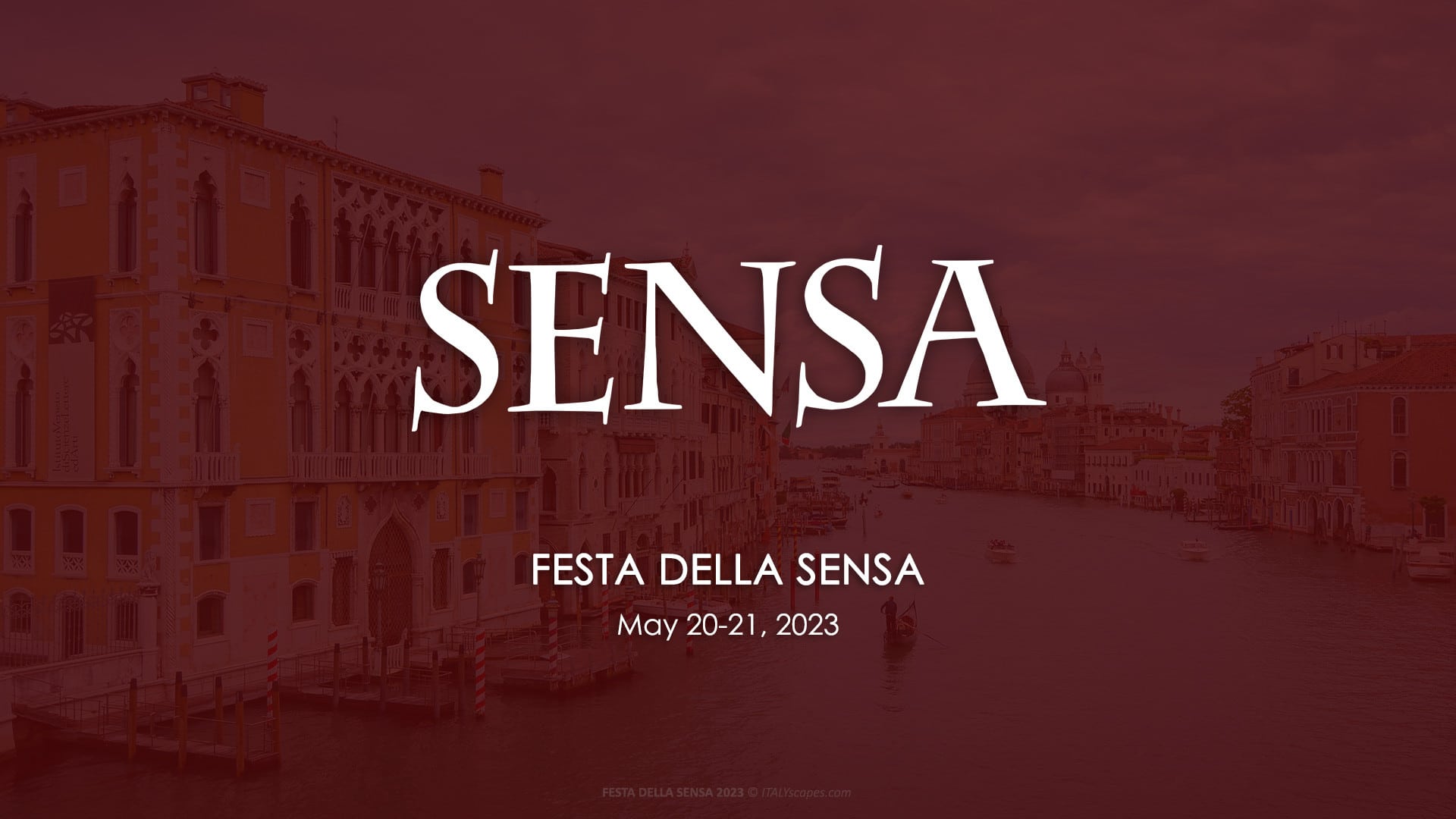 The Feast of the Ascension is one of the most evocative Venetian traditions, which recalls important moments in the history of the Republic of Venice, through the ceremony of Marriage of the Sea (Sposalizio del Mare). Today, the event is held in Venice on the weekend after the Ascension Day.

The first event commemorated by the festival occurred on May 9, in the year 1000, when the Doge Pietro Orseolo defeated the Slavs who threatened Dalmatia, allowing Venice to become the absolute power of the Adriatic Sea.

The second event recalls the peace treaty signed in Venice in 1177, between the Doge Sebastiano Ziani, Emperor Frederick Barbarossa and Pope Alessandro III, which marked the end of a centuries-old conflict between the Empire and the Papacy.

During the Sunday morning, the second day of the feast, takes place the parade of the boats led by the famous Bucentaur (Bucintoro), the boat of the Doges of Venice. From the Saint Mark’s Basin, the procession reach the Church of San Nicolo, on the island of Lido, where the beautiful ceremony of the Marriage of the Sea is held.

Palio di San Rufino, dedicated to Saint Rufinus of Assisi, the first bishop of the city, is one of the most interesting medieval festivals in Italy, a crossbow shooting competition between the three historical districts (terzieri) of the town: San Francesco, San Rufino and Santa Maria.

The historical reenactment event is held every year in Assisi on the last Sunday of August and the previous three days (Thursday, Friday and Saturday).

The Palio, a banner painted by a renowned artist, is awarded to the winning team, while the crossbowman who gets the highest score in the single-shot competition receives the Silver Crossbow (Balestrina d’Argento).

The most important moments of the Palio of Saint Rufinus are the investiture of the crossbowmen, followed by the shooting contest between the three teams of the Crossbowmen Company of Assisi, each representing one of the three districts.

The Historical Regatta, the most important event in the Voga alla Veneta calendar, is both a historical reenactment event and a sporting event, which takes place every year on the first Sunday of September, in Venice.

According to legend, the origin of the regatta dates back to the year 942, when, during a popular festival, the pirates kidnapped some Venetian women. Immediately, the pirates were chased by men in boats, who managed to catch them and release the women.

Today, the Historical Regatta begins with an impressive procession of boats similar to those of the 16th century, which navigate the Grand Canal, headed by a replica of the famous Bucentaur.

Seven rowing races take place during the day, structured by category, according to the age of the crew and the number of rowing men.

Palio di San Paolino is a historical reenactment event dedicated to Saint Paulinus of Antioch, the patron saint of Lucca, held every year on July 12, in the main square of the city, Piazza San Martino.

In 1169, during the war with Pisa, the government of Lucca, concerned about the constant assaults from the neighboring town, asked the old ally Genoa for help.

To strengthen the defence of Lucca, Genoa sent a certain number of crossbowmen. In a relatively short time, the local soldiers became experts in handling the crossbow.

The Palio of Saint Paulinus takes place in Piazza San Martino, in front of the Cathedral of San Martino. During the event, the participants will challenge each other using antique Italian crossbows. At the end of the competition, the judges will reward the first four classified crossbowmen. 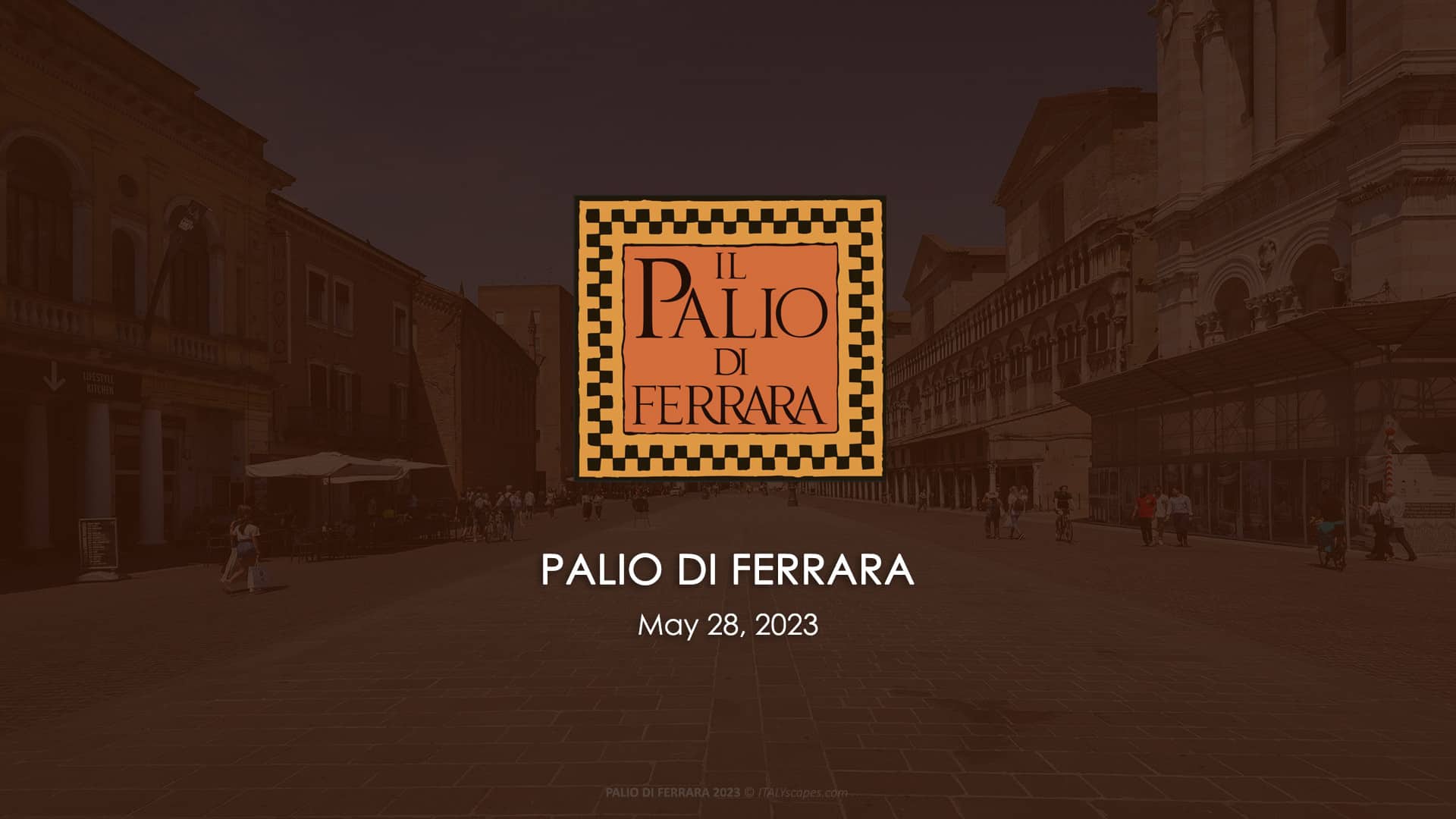 The Palio of Ferrara is a competition between the eight districts of Ferrara, four districts within the medieval walls and four villages outside the walls. The Palio is held every year on the last Sunday of May.

According to tradition, the people of Ferrara, to celebrate the victory obtained in 1259 by Azzo VII d’Este against Ezzelino III da Romano, ran on donkeys and horses through the streets of the city.

Later, the Palio began to commemorate the moment when Borso d’Este was appointed duke by Pope Paul II and returned to Ferrara on the last Sunday of May, 1471.

Match of the Siege is the most important match in the Calcio Storico Fiorentino calendar of events, which takes place every year on February 17, in Florence. The game is played in Piazza di Santa Croce, in front of the Church of Santa Croce.

Calcio Storico Fiorentino (Historical Florentine Football) is an early form of football born in the 16th century, a mix of rugby, soccer and wrestling, which is still played in Florence.

The four teams facing each other on the field are the Bianchi (White) of Santo Spirito, the Azzurri (Blue) of Santa Croce, the Rossi (Red) of Santa Maria Novella, and the Verdi (Green) of San Giovanni. The game is very violent and often ends up with broken limbs and a lot of blood. 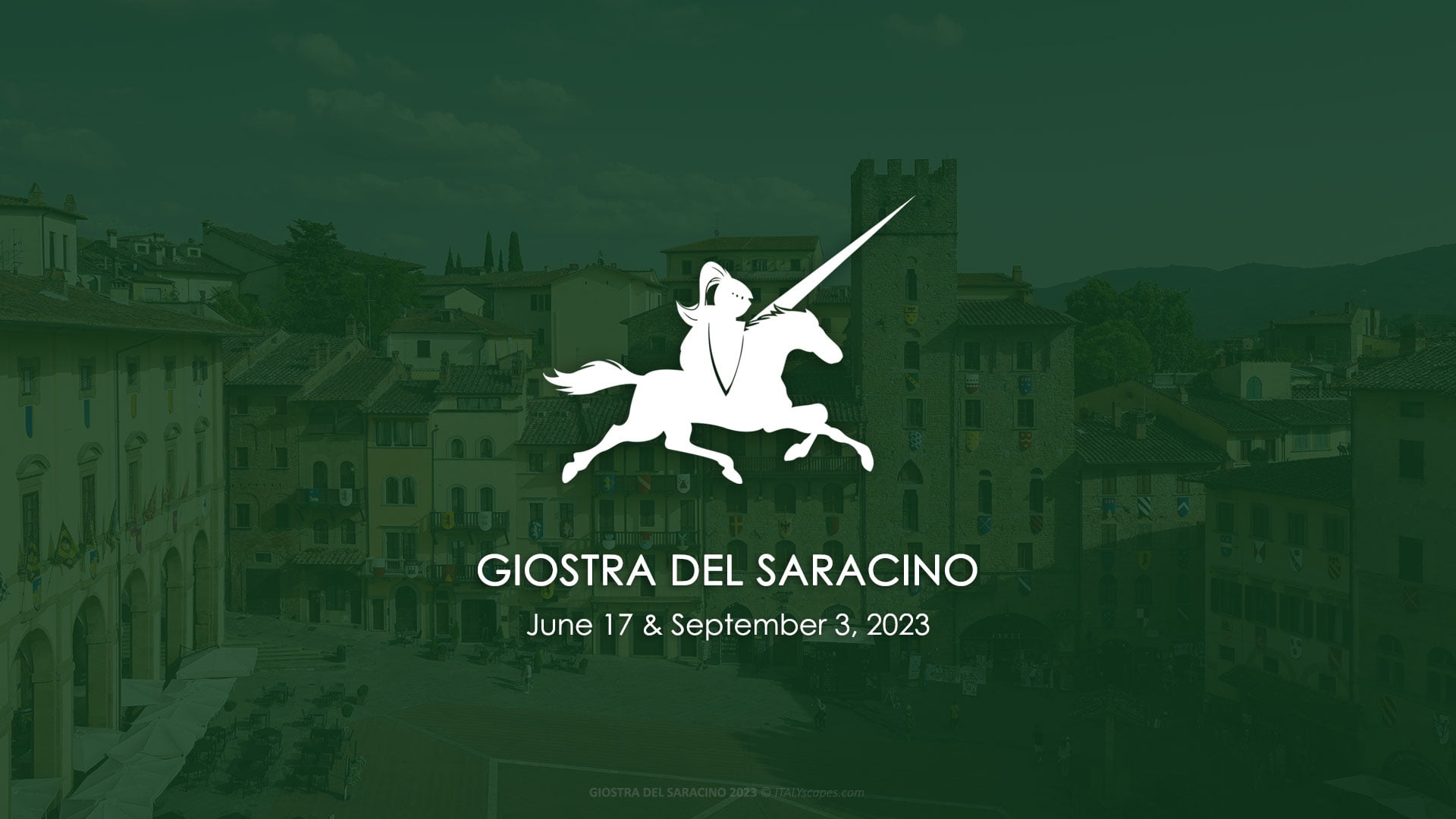 Giostra del Saracino (Saracen Joust) is one of the most important medieval festivals in Italy, held twice a year in Arezzo, in the beautiful Piazza Grande.

Giostra di San Donato, dedicated to Saint Donatus, the patron saint of Arezzo, is held in the penultimate Saturday of June, during the evening, while Giostra della Madonna del Conforto, dedicated to Our Lady of Comfort, protector of the city, takes place in the first Sunday of September, during the day.

The Saracen Joust is a competition between the four Quarters of the city: Porta Crucifera, Porta del Foro, Porta Sant’Andrea and Porta Santo Spirito.

The competition consists of hitting a target held by the Buratto, a revolving armor-plated dummy which personifies the King of the Indies. The couple of knights with the highest score win the competition. 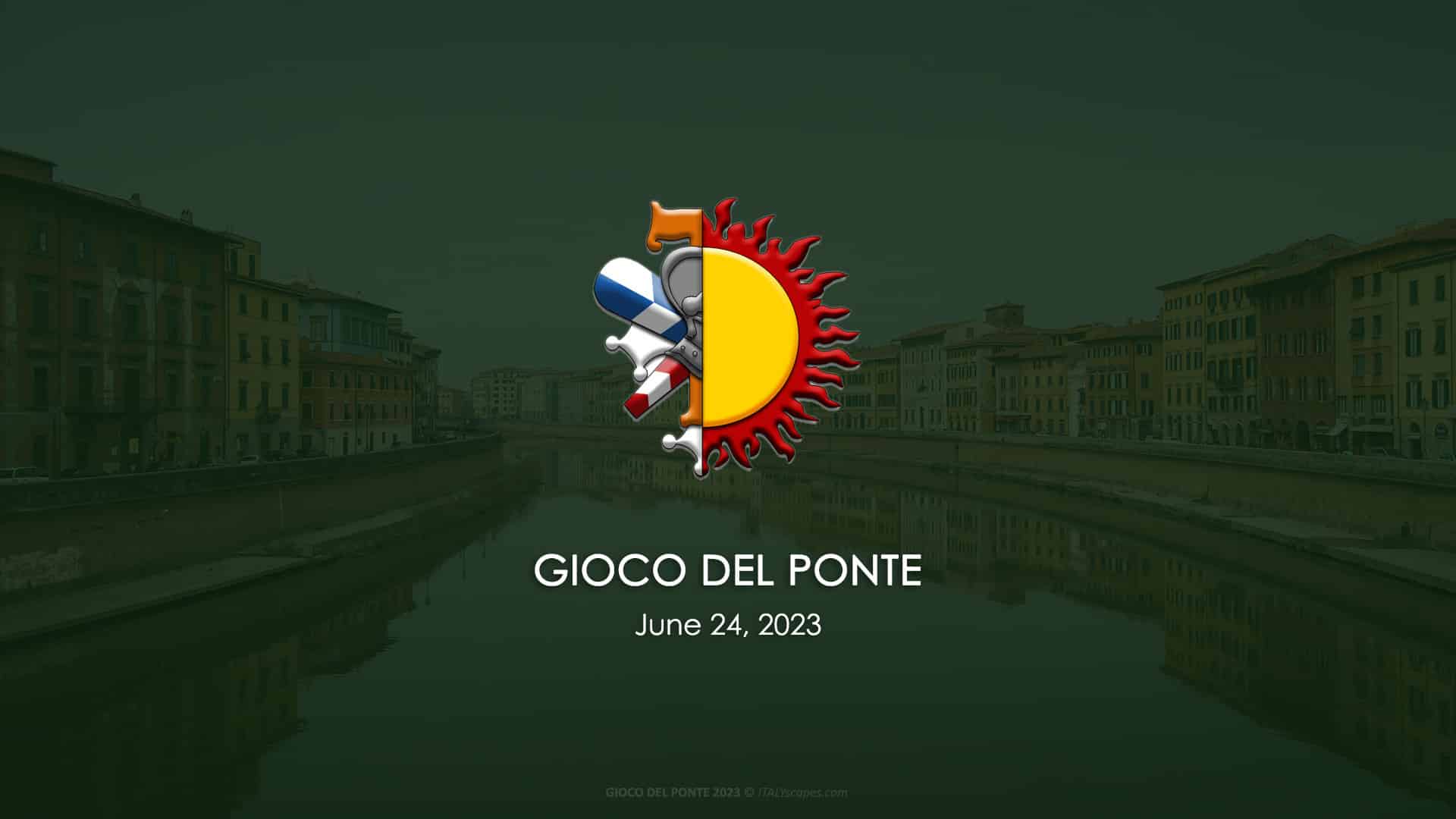 Gioco del Ponte (Battle of the Bridge) is a historical reenactment event held every year on the last Saturday of June, in Pisa.

The Battle of the Bridge has its roots in an ancient violent game called Mazzascudo, held on the day of Sant’Antonio Abate, on January 17.

The event takes place in five stages: the march of the troops along the riverbanks of the Arno, the formal opening of the battle, the call to arms, the challenges made by ambassadors, and finally, the battle itself.

Calendimaggio is one of the most beautiful medieval festivals in Italy, held each year in the first Wednesday, Thursday, Friday and Saturday after the 1st of May, in Assisi, to greet the arrival of spring.

The parts challenge each other for the conquest of Palio, through parades in medieval costumes, reenactment of medieval life and musical performances.

A jury, composed of internationally renowned experts (a historian, a musicologist and an entertainment personality), choose the winner of each edition. 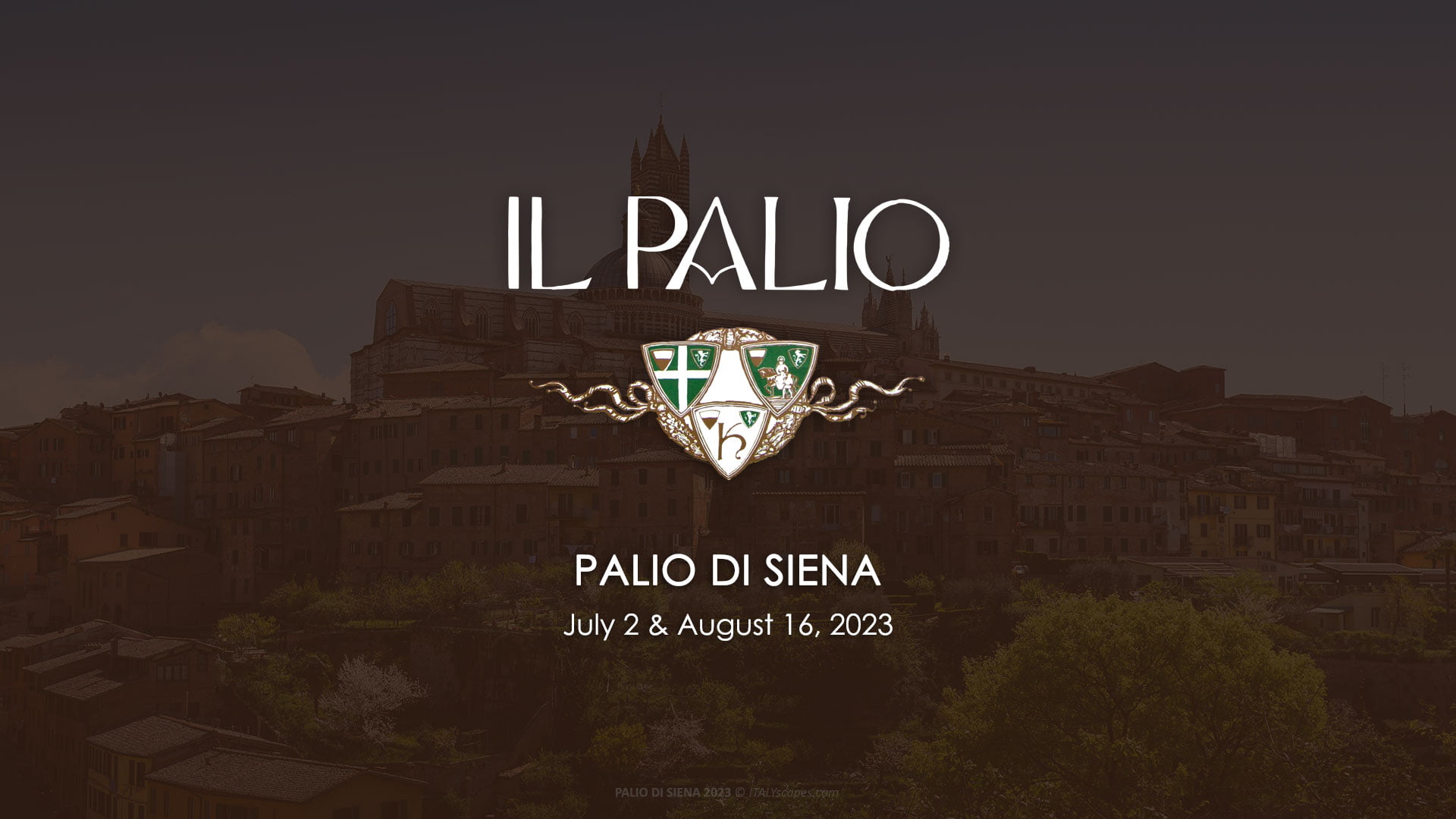 Palio di Siena is the most important medieval festival in Italy, which is held twice a year in Siena – Palio di Provenzano on July 2, dedicated to the Madonna of Provenzano, and Palio dell’Assunta on August 16, in honor of the Assumption of the Virgin Mary.

The Palio of Siena is practically a horse race between the 17 contrade (districts) of the city, held in the shell-shaped square of Piazza del Campo.

The race is preceded by the Historical Procession (Corteo Storico), a parade of about 700 people dressed in medieval costumes.

Only 10 contrade out of a total of 17 will participate in the event – three drawn from last year’s participants and seven that were not present at the previous edition of the Palio.