The powerful Gonzaga family reigned over Mantua for almost 400 years, and during their domination the city became one of the most important cultural cities of the Rennaisance.

Although many works of the above-mentioned artists disappeared over time, there are still many that we can admire during a visit to Mantua. Let’s review below the most important of them… 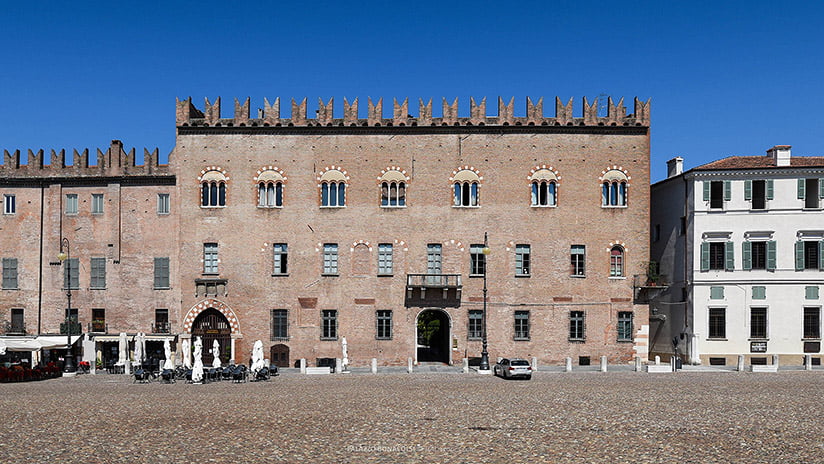 Palazzo Bonacolsi, also known as Palazzo Castiglioni, is a Gothic palace in Mantua, located in the beautiful Piazza Sordello.

Palazzo Bonacolsi was built at the end of the 13th century by Pinamonte Bonacolsi on land purchased from Rolandino de Pacis. Starting with 1328, the palace became the property of the Gonzaga family. At the beginning of the 19th century, the palace was bought by the Castiglioni family from the Bevilacqua counts.

The palace, built entirely in terracotta, is crowned by Ghibelline battlements. The top floor has three-light mullioned windows, while the two lower floors have rectangular windows. Through the central portal of the palace, one enters a large inner courtyard, occupied by a beautiful garden. 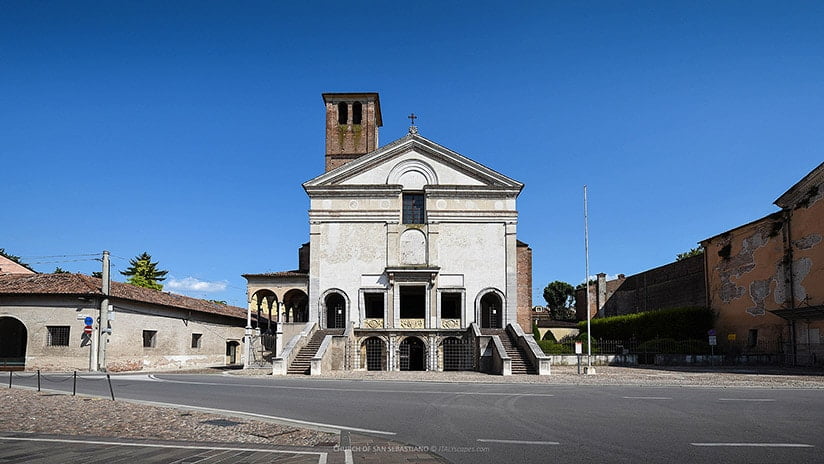 Ludovico III Gonzaga, Marquis of Mantua, commissioned the construction of the church to the architect Leon Battista Alberti. The construction was begun around 1460 by Alberti, but was completed after the death of the architect by Luca Fancelli, at the beginning of the 16th century.

Alberti designed an austere and solemn building. The church has a Greek cross plan, with three identical short apses, under a central cross-vaulted space without any interior partitions. The church is divided on two levels. The lower one is the crypt, which was intended to serve as a mausoleum for the Gonzaga family. 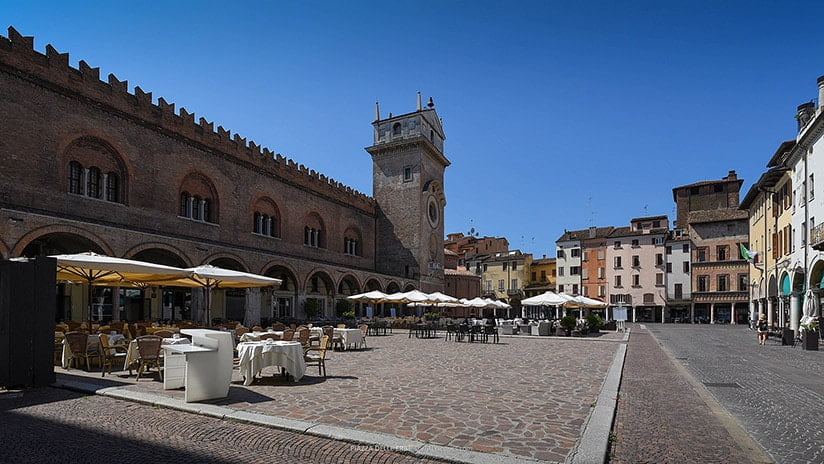 Piazza delle Erbe is one of the main squares in Mantua. The square began to take shape towards the end of the 12th century, when a vast unpaved land on the eastern side of the Basilica of Sant’Andrea was used as a venue for the cattle market.

The space in front of Via di Sant’Andrea, where shops were already built, was divided in two by Palazzo del Podesta, built in 1227. Palazzo della Ragione was built around the middle of the 12th century.

In the second half of the 15th century, Luca Fancelli transformed the square in Renaissance style. He intervened on Palazzo del Podesta, rebuilt the arcades in front of Palazzo della Ragione and designed the Clock Tower. 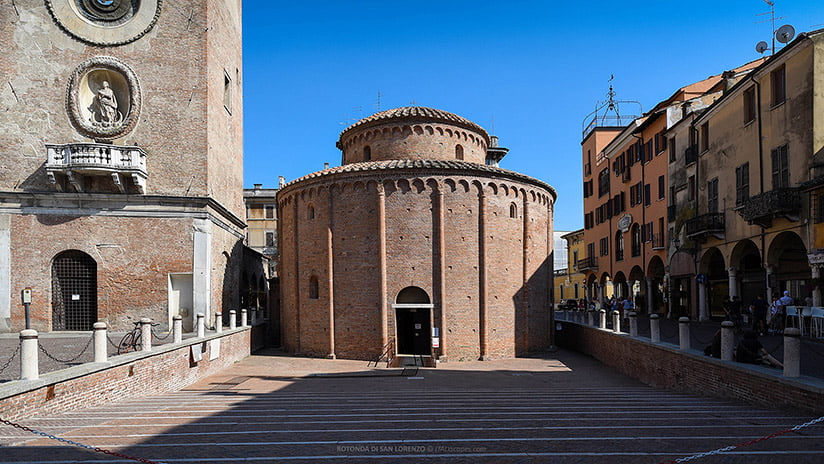 Rotonda di San Lorenzo is the oldest church in Mantua, located in Piazza delle Erbe. According to tradition, Rotonda di San Lorenzo was built at the behest of Matilda di Canossa, as an evocation of the Church of the Holy Sepulchre in Jerusalem. Over the centuries, the church underwent radical transformations.

In 1908, the building was expropriated and its demolition was authorized. During the works, the church was freed from the buildings around it, and the Municipality changed its plan, and reconstructed the dome. In 1926, the church was re-consecrated, and reopened for worship.

The church, according to Lombard tradition, is built in bricks. A notable example of Romanesque style, the church has a central plan, completed by a semicircular apse, characterized by a matroneum (loggia for women), which preserves fragments of frescoes from the 11th-12th centuries. 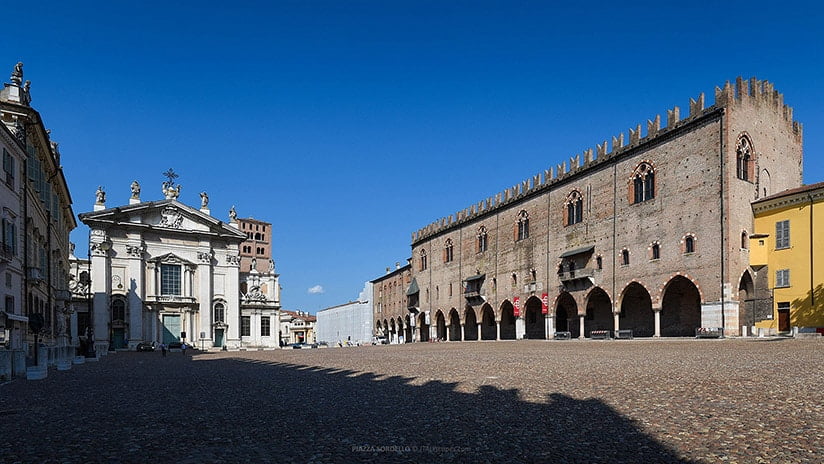 Piazza Sordello is a beautiful square in Mantua, dedicated to the Mantuan troubadour of the 13th century, Sordello da Goito. The square was built in 1330, after the demolition of some old buildings located between two parallel streets that followed the urban design of the ancient Roman city.

To the north of the square, there is the Cathedral of San Pietro, built between 1395 and 1401. To the west of the square, we can find Palazzo Bianchi, a palace built in the 18th century.

To the east of the square, there is the Captain’s Palace and Magna Domus, both built before 1328, the year of the rise to power of the Gonzaga family. The buildings are part of the Ducal Palace. 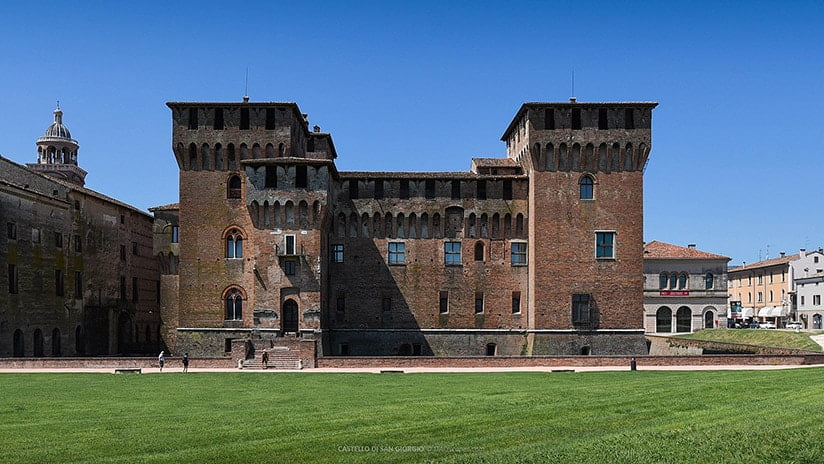 Castello di San Giorgio is a moated rectangular castle in Mantua, located in the northeastern corner of the city. The castle is part of the Ducal Palace.

Castello di San Giorgio was commissioned by Francesco I Gonzaga to the architect Bartolino da Novara, and built between 1395 and 1406. In 1458, the architect Luca Fancelli, at the behest of the Marquis Ludovico II Gonzaga, renovated the castle, which definitively lost its military and defensive functions.

The Castle of San Giorgio is a square-plan building with four towers at the corners, surrounded by a moat with three drawbridges. Camera Picta (Painted Chamber), also known as Camera degli Sposi (Bridal Chamber), is a wonderful room located on the piano nobile of the northeastern tower of the castle, frescoed with illusionistic paintings by Andrea Mantegna. 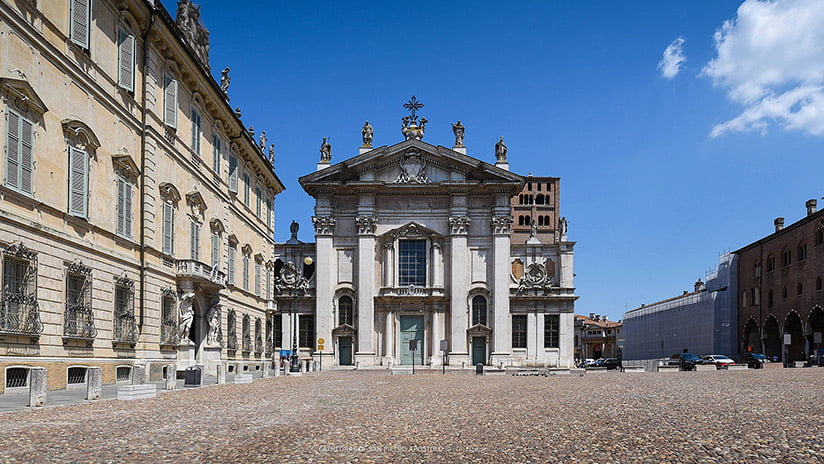 A first church of early Christian origin was erected on this site in the 5th century, and destroyed by a fire in 894. The church was rebuilt in Romanesque style in the 11th century, and became the Cathedral of Mantua.

The current church was rebuilt and enlarged between 1395 and 1401, at the behest of Francesco I Gonzaga. The current Baroque facade was built in marble between 1756 and 1761 on a design by Nicolò Baschiera.

The Cathedral has a Latin cross plan, with a hall divided into five naves by four rows of fluted Corinthian columns. 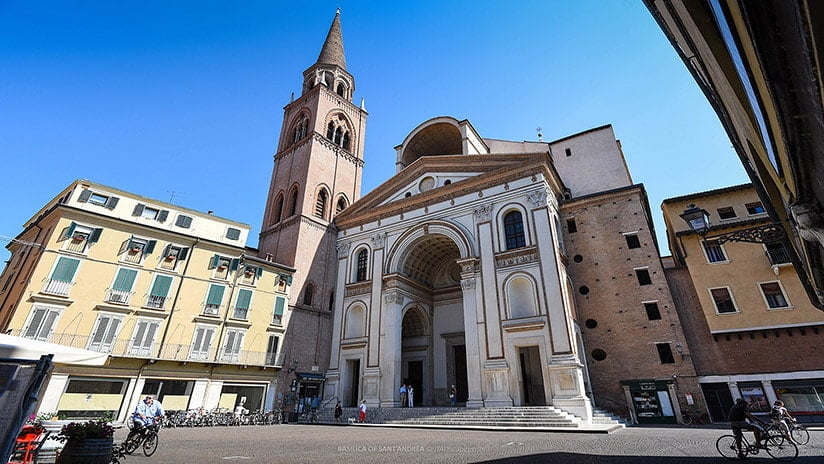 The Basilica of Sant’Andrea is a Renaissance church in Mantua, located in Piazza Andrea Mantegna. Inside the crypt of the basilica, two reliquaries with earth soaked in the Precious Blood of Christ are preserved.

A first church dedicated to Sant’Andrea was built on this site in 1046 at the behest of Beatrice of Lotharingia. The last rebuilding of the church was initiated in 1472, on a project by the architect Leon Battista Alberti, commissioned by Ludovico III Gonzaga, Marquis of Mantua.

The monumental facade is based on the scheme of a Roman triumphal arch, superimposed on the theme of a classical temple. The large central arch is framed by Corinthian pilasters.

The interior of the church has a Latin cross plan, with a single barrel-vaulted nave with coffers, and with lateral chapels with a rectangular base. 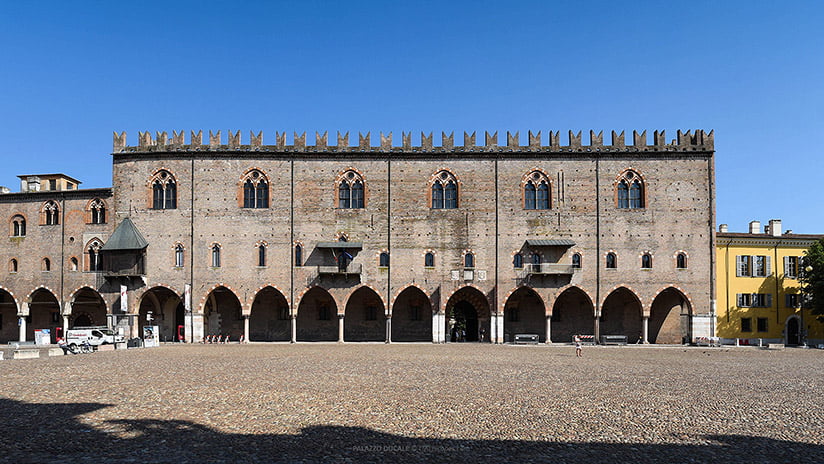 Distinct buildings were built in different eras, starting with the 13th century, initially by the Bonacolsi family, and subsequently by the Gonzagas.

Palazzo Ducale covers an area of more than 35,000 square meters, which makes it the sixth largest palace in Europe after the Vatican palaces, the Louvre, the Palace of Versailles, the Royal Palace of Caserta and the Castle of Fontainebleau. The palace has more than 500 rooms and contains 7 gardens and 8 courtyards. 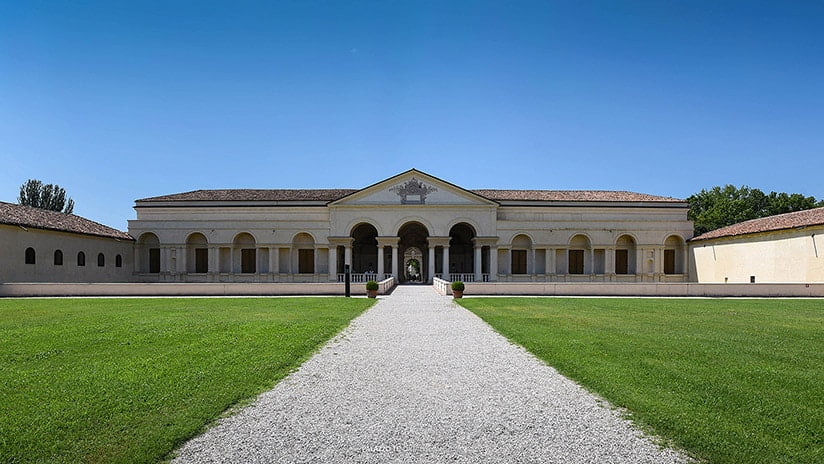 Palazzo Te is a Renaissance palace located in the suburban area of Mantua, built at the beginnning of the 16th century by the architect Giulio Romano. By alternating the architectural elements with natural ones, sublimely decorating rooms and facades, the architect put all his imagination and skill in the construction of Palazzo Te.

Palazzo Te has a square plan, with a large courtyard in the center, which once hosted a labyrinth. The external facades have two levels, joined by giant Doric pilasters.

The most impressive room in the palace is the Hall of the Giants (Sala dei Giganti). The fresco of the Fall of the Giants was painted between 1532 and 1535, covering the room from the walls to the ceiling with the representation of the battle between the Giants and the Gods.

Venice has approximately 3000 hotels, bed and breakfasts, hostels and other types of accommodation, but which are the 10 best for …
Read More

Top 10 Most Beautiful Churches in Venice

Although the historical center of Venice, located on a group of 118 islands, is small, the number of monuments and buildings …
Read More

Starting with May 2023, the citizens of the United States of America who travel to a European country in the Schengen …
Read More
We use cookies on our website to give you the most relevant experience by remembering your preferences and repeat visits. By clicking “Accept All”, you consent to the use of ALL the cookies. However, you may visit "Cookie Settings" to provide a controlled consent.
Cookie SettingsReject AllAccept All
Manage consent